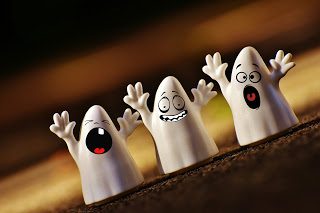 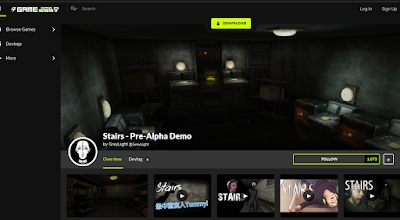 Stairs is a game made with unity. It has around 30 minutes of gameplay and is super creepy and fun throughout those 30 minutes. The game is made with unity. The story revolves around a person (i.e. the character you control) who goes to an abandoned place for investigation for the second time. Things that had happened in the past starts to get unfurled as the story proceeds. Many years back a group of friends got stuck here with meagre food supply and soon they had to eat each other to survive. In the end, only one person survived and in the game, you can see a room with human limbs on a counter-top, so, that makes it clear how he managed to survive. The spirits of the dead men still haunt the place and we are stuck with them and have to get out ASAP.

Eyes is an indie-horror game also made with unity. The game has around  20-30 minutes of gameplay and gives you huge adrenaline rush every now and then. In this game, you have entered an old house to find 20 bags loaded with money. The place is haunted by a ghost which just has a hovering head with long hair and a bloody spinal cord hanging from the backside of its head. You have to find the money bags and get out quickly. While you’re searching for the bags you may find some eyes imprinted on the 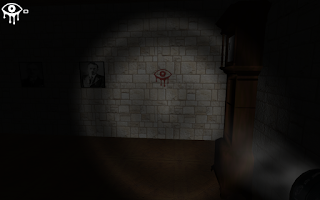 walls of the house, these are the most important thing in the game and thus the game is named ‘Eyes’. These “eyes” allow you to see through the ghost’s eyes which can help you locate the ghost and then you can avoid going to that place. The game is totally mind-blowing and is a must-try if you like horror games. 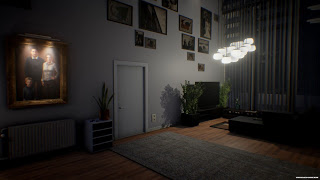 Notes of obsession is a game made by Swedish students and has around 20-25 minutes of gameplay. The graphics are tremendous and the game itself is surely the best one on this list or maybe the best free indie horror game ever made. You wake up in a house and proceed to follow the sound of music coming from some part of the house. Soon, you find the source of music which turns out to be a music box lying in a room which seems to belong to a child. On winding the key of the music box you start to see

symbols made with fiery orange light. As you interact with these symbols they help you to open doors and unlock the cupboard that has an antique blade sitting inside it. Alas, there is one setback of winding the music box, a creature seems to get powered and is controlled by the sound of the music box. The creature is a body of a human with no legs and eyes and nose pulled off its head. It crawls on its arms and searches for us all over the house. The game in my personal opinion gets a Ten-On-Ten because of its intense and creepy atmosphere and also because the game developers managed to keep away from the cliched plot of most of the horror games.

I’m scared is a pixelated horror game and has a strangely creepy aura. The game has a gameplay of around 25 minutes and is really fun. The game is set in a weird place with lots of room and doors. It’s basically a nightmare that we are living. Just like most of the horror games you have to get out of the place ASAP. There are quite a lot of twists and turns in the game. As I said that the game is strange, I would also like to add that the game is strange yet, quite unique as the game has no creepy soundtrack, any gory creatures or any kind of jumpscares. Later in the game, a kind of masked man follows you in the darkness and you have to just run away. This game is worth trying but don’t have very high expectations as this game is just for killing time.

Calm Time is another pixelated horror game. The game starts with a calming soundtrack and the narrator tells us about how he lives in an isolated cottage away from the hustle bustle of the city. As the game starts we are hosting a house party and have a few guests moving around. As the story proceeds, we get to know that the character we are controlling is a serial killer and we stab one of our own guest using a kitchen knife. Creepy stuff starts to happen as the guest has been killed, the woman we had killed months ago becomes a ghost and prevents us from hurting other guests. But we have to kill all the eyewitness and make the place calm once again. The game is not very long and has 20 mins of gameplay. It is really subtle and intense game and is really worth trying.

One Late Night is a great indie game with decent graphics. The story revolves around a person who is working late at night at his office he wakes up on his office desk and gets up to help himself with some coffee. The guy is alone in his office and weird stuff starts to happen. On investigating the office we find the key to Robert’s (our colleague) office, just after this, the game takes a huge turn and extremely creepy stuff starts to happen. We see possessed balloons 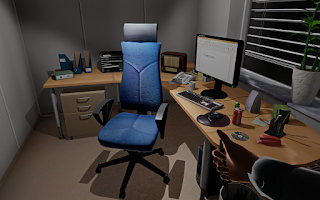 (which is supposed to be scary) and a nun trying to kill us. The game doesn’t have many jumpscares but is really scary and is a “real-horror-game” in every sense. Just like the game “Eyes” this game also gives you huge adrenaline rush and also has a creepy atmosphere so, this game is obviously a must-try for anyone and everyone!