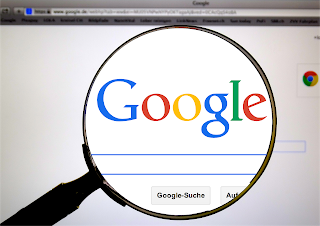 Google is the most popular search engine in whole wide world (or you could say whole world wide web) with over 3.5 billion searches every single day! This means that every second, on an average 40,509 searches are held on Google! Google was created by Larry Page and Sergey Brin on 4 September 1998 in the United States. Despite of having so many users, Google has succeeded in keeping a few secrets from us. Here is a list of top 10 secrets and easter eggs that google has been hiding from us.

Do a Barrel Roll; 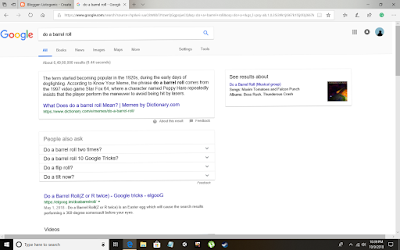 Barrel Roll, we all know what it is, but just for those of you who have no interest in “adventurous” stuff like rolling down the hill or even those who have never played a car racing game, let me do my best to make you understand. A barrel roll is a movement where an object rolls with a fixed longitudinal axis. Now that we are done with lessons, I am going to talk about the most basic secret or Easter egg related to barrel roll. Most of you may already know but some of you out there who use Google for what it should be used for, then I’m sorry you may not know about this one. To check out this Easter egg you need to do something really obvious… Yes, search for ‘do a barrel roll’ on the google search engine. Now, as a result, Google will also do something pretty obvious… Yes, of course! It will do what you just asked it to do. The whole google search result screen will do a barrel roll and get back into place. See, the thing is, Google is an obedient chap but, it won’t obey something like ‘do a front flip while holding a banana’ because at the end of the day it is a search engine not a roadside talent show. (please don’t experiment keywords like that….) 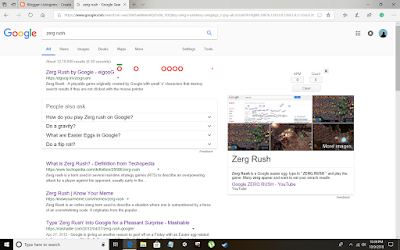 Zerg rush is officially a term used when in a video game continuous attacks are performed by the enemy, usually using a ton of characters who attack but have low HP. Well, in this one also you have to do something obvious… Yes, search for ‘Zerg rush on google and once you do that a lot of Letter Os from Google start attacking the result. You have to use your left click on the mouse to shoot them and save those search results. Even though you don’t need search results to know the meaning because Google already explained it to you. The letter Os also greet you with the good old “GG” at the end of the game. There is also a scoreboard shown on the top right-hand side of the page to show your Statistics. This term was officially popularised by a very popular game called StarCraft where at the start of the game the enemy would attack us with a ton of weak troops called zerglings. 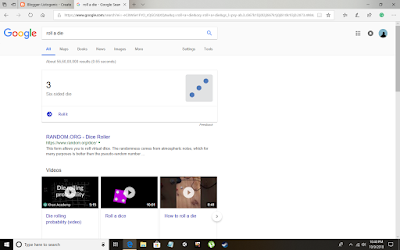 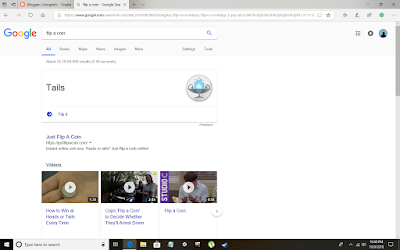 People like me may be lazy and procrastinators with nothing to do all day, but hey, that doesn’t mean we don’t get to make crucial and life-changing decisions. At a local store, you may see Cheetos lined right beside Doritos and you can buy only one. Who do you ask for help? Of course, Google! But hey, you don’t wanna watch a ten-minute YouTube video on a comparison between Doritos and Cheetos you want a quick decision. So go to the google search engine and type in ‘flip a coin’ and hit search, heads for Cheetos and tails for Doritos. On top of the search result you will see a coin flipping and in a second or two it will show whether it ended up being a heads or a tails. But to be honest, life doesn’t always give you only two choices. In those cases, go to the google search engine and type in ‘roll a die’ and on hitting search Google will roll a die for you and you could make decisions when you have more than one choices. Oh yeah, you could also use it for playing board games if you can’t find one (something that a die is originally used for). 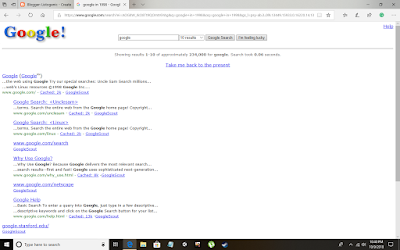 Google was founded in the year 1998 and since then, it has gone from being an ordinary search engine which very few people knew about at the starting to being worth more than a whopping $800 billion! On Google’s 15th birthday in the year 2013, Matt Cutts (an American software engineer) tweeted saying, “To celebrate Google’s 15th birthday, an easter egg shows how Google used to look: http://www.google.com/Blah blah blah”. To check out this Easter egg you have to search for ‘Google in 1998’. The search results will be shown in the same manner as they used to 20 years ago! You can’t use this layout for any other search though. You will notice the old Google logo on the top with an exclamation mark. On the top of the page you will see a link saying “take me back to the present” and of course it shows you the search results for your query ‘Google in 1998’ with the current search engine. 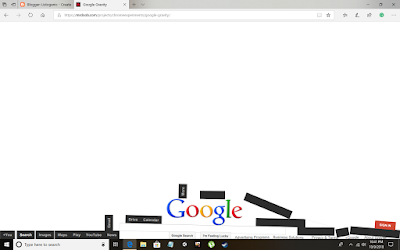 Nothing defies the laws of Physics, not even google. Just to see an example, search for ‘Google Gravity’ and click on the first result. Once the page is loaded you will see Google Start-Page. But in just a few seconds it will no longer be a normal web page. All the content on the page will fall down and get piled up at the bottom of the browser window. You can still search for some stuff if you manage to rummage through the boxes and find the search bar and hit the search button. The results will fall down too and stack up on the other boxes. Everything remains the same the only difference is that Google no longer defies gravity. You can still see the Google Doodle and links still work. The last thing you want is to run out of space and no longer be able to see more results. I still try to throw out unwanted boxes out from the sides of the browser window and most probably they make their way into another dimension. 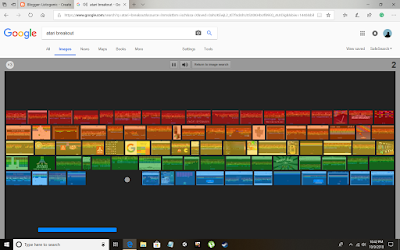 We all had already bought a GBA console by the late 1970s. As many people had bought this console, video-game companies were trying their best to make a game that everyone would love to play and rush to the store to buy that game. In 1976, Atari Inc. released a game called Breakout. The objective of this game was simple, you had to destroy all the block with a ball that bounces off all of them. You had to control a platform and prevent the ball from going down below. The game was a super hit and almost every Atari 2600 or GBA owner had this game. Google has given this game a tribute by dedicating an Easter egg to them. Go and search for Atari breakout in google and once the page is loaded, BOOM! Nothing will happen. However, if you go to the images tab, you will see all the result images turn into colourful blocks and a grey ball will start bouncing back and forth on the blocks and you have to control a blue platform on the bottom of the screen and preventing the ball from escaping the play area. Now, you can play Atari breakout and relive those nostalgic memories. 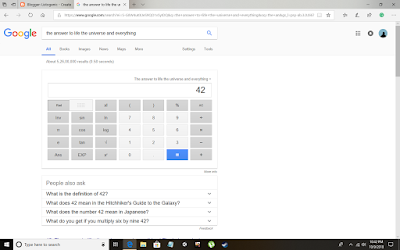 Let’s be honest, we all have had weird and philosophical thoughts at least once in our lifetime. Sitting on a couch and having thoughts like “What is

life? Is there another universe? Why are we still here? Just to suffer? (sorry, couldn’t resist)”. Well, Google just made it simple for us to understand the true meaning of life and answer to all these questions. A long time ago, even Google didn’t have answers to these questions but, instead of leaving the questions unanswered Google researched for years and finally got an answer. If you want to know then go search for “the answer to life the universe and everything” Google will show a calculator and the result turns out to be the number 42. This is actually an Easter egg and a reference to the series Of book ‘The Hitchhiker’s Guide to the Galaxy’. The series is written by Douglas Adams, who stat that 42 Is the ultimate answer to life the universe and everything. Maybe this is just a reference or maybe 42 really is the ultimate answer to everything.

We have all read fairy tales in our childhood with magical lands and queer creatures. Turns out google held a research regarding one of the many fictitious characters in these tales; the unicorn. Google figured out something we humans could have never figured out. Go to google and search for ‘ the number of horns on a unicorn’. According to Google Calculator, 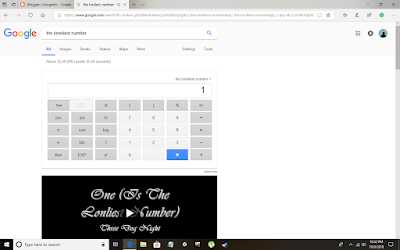 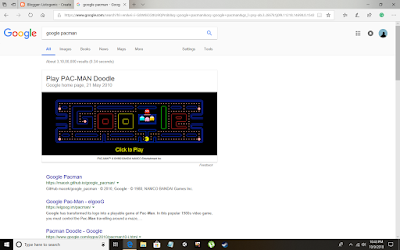 PacMan was an arcade game developed and published by Namco. The game sold more than 7.7 million copies. It was programmed by Shigeo Funaki and designed by Toru Iwatani. The game was first released in Japan in May 1980. On 21 May 2010 Google celebrated the 30th birth anniversary by making a special Google Doodle for the game. The doodle was special because we could play Pacman with a special ‘Google Arena’. The ‘Google PacMan’ can be played even today, years after the Google doodle has been released and is now referred to as an Easter egg. Search for ‘google Pacman’ in google and on the top of the results you will see the google doodle which says ‘Click to play!’ and voila, on clicking the doodle you can play Pacman on your device. 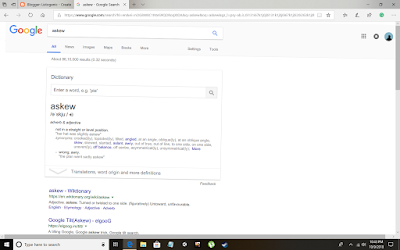 Google has shown us a practical explanation of a barrel roll and as well as Zerg rush. Google has also explained to us the meaning of another word by a practical explanation. Search for the term ‘askew’ in Google, by doing this the definition of the term will come up but wait, Google has already explained the meaning by tilting the whole web page a few degrees to one side. According to the dictionary, askew means “in a crooked position; awry”. The same Easter egg used to appear when you would search for the term ’tilt’ in Google. However, the Easter egg now seems to work only if you search for ‘askew’ and nothing else.