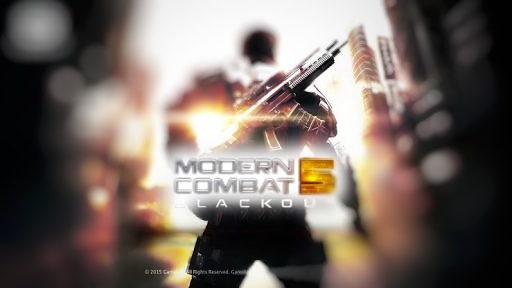 Modern Combat 5 was launched by Gameloft in the year 2014. Soon after, its release it became the most popular mobile FPS game and was played by almost everyone who had heard of the game as it was free to play. The game has over 100 million downloads on Google Play Store alone. The game had amazing graphics and also has a campaign mode and many game modes like Capture the flag, Free-For-All etc. Even though the game had a few qualities to remain on the top, it is now officially dead. The game lost its popularity due to many reasons and we’re going to talk about the most prominent ones.
1. Hackers
This is usually the prime reason for most of the games to die. MC5 now has just over a bazzilion hackers wandering with aim bots, shooting at the ground and getting headshots, shooting through walls and of course some of them are immortal. The game is a total mess. At the beggining there were only a few hackers, people used to report them hoping Gameloft will take an action. But, Gameloft would not even reply let alone taking a strict action. Players didn’t get any reply and faced even more hackers day by day, as a result, people uninstalled the game and this meant a loss of a huge amount of players. The game went from Players vs Players to Hackers vs Hackers. Since there are not many players playing now, and there are only cheaters playing, it’s really difficult to find a match with less than 2 people using mods. Once I was playing this game and saw a guy 10 metres away from me. He saw me and started coming close to me. I almost instantly started shooting and emptied my Assault Rifle magazine, hitting at least three headshots. He reached up to me and did a knife kill! Once you die in this game you can see the HP of the guy who killed you, showing how much deamage you dealt. He had 100% health. I thought that I lagged, but I had 60ms Ping and 50+ FPS. This was the last time I played that game.
2. Campaign
Campaign had a typical FPS story and was really slow. The levels were really short and had a clichéd plot. The campaign also had an energy system which meant you could only play a few games before waiting for the energy bar to refill. This was extremely pointless and made it a typical Gameloft game. Not saying that energy system is bad concept but en ergy system is really annoying. Most gamers who play FPS games that have a storyline like to grind the story mode and play campaign missions for a long time. This helps them get better at game and is also really fun as you can play offline and get to know the complete story. Each mission was really short and costed one energy level. This meant you had to spend the whole energy for a small amount of gameplay. This was also a reason why people detested the game especially the campaign.
3. Pay-To-Win
Many people accused the game to be Pay-To-Win. This could be somewhat true but I am not convinced. Even though you need to grind campaign missions for a really long time to get skins, weapon blueprints etc. You can get them without paying but it will be a dead slow process. So partially it is a Pay-to-Win game but can’t deny the fact that you can get all the resources with skills. Another setback for shorter missions is that people can’t grind the missions for long. Only if the missions were longer or there was no energy system players could have grinded the game and earned the skins, blueprints etc. The game is indirectly made to be pay-to-win and forces the player to spend some bucks.
4. Modern Combat Versus 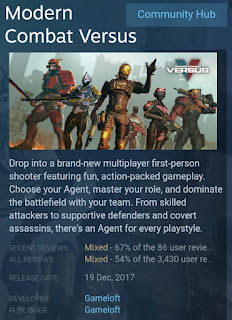 Another reason why MC5 was abandoned by the developers was that they made a new game called Modern Combat Versus. MCV was released just 3 years after Modern Combat 5. Even though the game has ‘Mixed’ reviews on Steam. It is still better than MC5.

Now, all that we can hope is that Gameloft succeeds in maintaining Modern Combat Versus and release more games like what MC5 used to be.

3 thoughts on “4 reasons why Modern Combat 5 is dead”